skip to main | skip to sidebar

So I went to watch the Dodger play the equally hapless Mets last Saturday.
I had read in the LA Times that the Dodgers (by way of their food server - Levy Restaurants) would be offering some gluten free items this year.  I didn't want to post until I checked it out.

You need to find the Kaiser Permanent Healthy Plate cart.
Here is what the cart sign looks like... 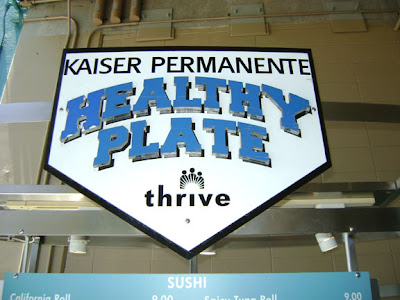 Here is a picture of the prices...notice that the GF Beer, Redbridge, is not unreasonably priced (for a ballpark) at $6 per 12 oz bottle. It is about a 400% markup over normal store prices...like most other beer. 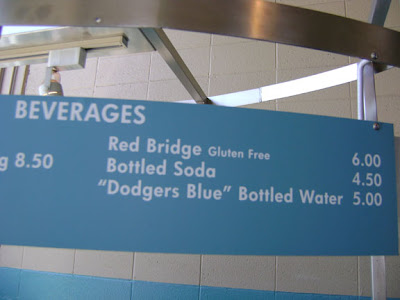 And lastly, here is a picture of the gluten free redbridge beer (so you know it is not a myth).  Remember, beer sales stop in the 7th inning, so get their early and ask for the Kaiser Cart with the gluten free beer... 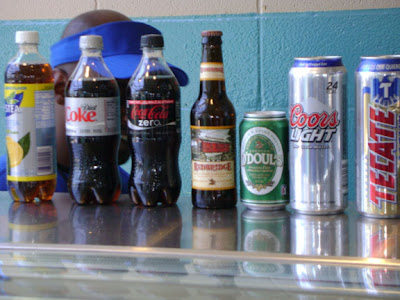 Sadly, the food left almost everything to be desired...they only had GF snacks.

There were only 3 choices..1) gummy bears 2)pistachios 3)snack bars.
(and the gummy bears were getting mushy in direct sunlight)

I wrote before about the new gluten free food at the new Met Stadium, which included some GF BBQ and other fun things.  Even the Washington Wizards have some GF foods available.  It's sad that there are not better offerings for the 56,000 fans that Dodger Stadium can hold. If they have an average ratio of about 1 in 100 people as a celiac, that means there are 560 celiacs that can't buy a proper meal at Dodger Stadium (when the stadium is sold out).

In short, it is a good start, but underwhelming.  It would be great if the Dodgers and Levy Restaurants were more proactive about catering to people with dietary needs (particularly celiac disease).  I would go to more Dodger games each year if I was able to eat food (which means more food, ticket, and parking money for the McCourts).
Posted by Simon

About Your Local Celiac

Simon
Los Angeles, United States
I'm tired of browsing the web to double check my memory. I created these blogs as a single source for me to use in leiu of the searching, and for my friends to use when they have questions...It will be updated infrequently based on my needs...both gluten free food or tech related. My food posts are going to have a bit of a West Coast leaning to them (along with a healthy dose of sarcasm, humor, and the occasional rant - though I think you may have figured that out already). Tech posts will be for me to refer to or to create valuable information that I have not found compiled anywhere else that may be of use to other people.