skip to main | skip to sidebar

I just returned from my New York trip, visiting a wide range of gluten free places to eat.
Here is the first review. 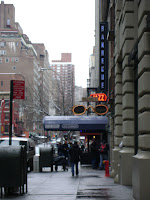 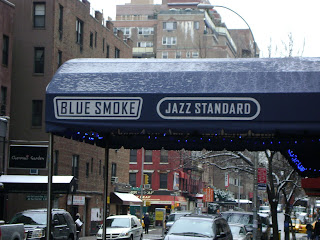 I took the 6 downtown from Grand Central Station and it was about a 45 second walk from the 28th street subway exit to the restaurant.

If you like Jazz or knows someone who does, Jazz Standard is right next door. You get your GF BBQ in NY and they get their Jazz. It's a win/win...like when Kobe shoots 4 for 21 and the Lakers win anyway. But I digress...on to the food.

Blue Smoke.
Their business card claims "Urban Barbecue" but I call it downright delicious (say it with a drawl). Their GF menu is small but the ribs make it great. You order everything separately...

I devoured the Kansas City Ribs (full rack of pork), Mashed Potatoes, and Baked Beans. I also tried the Texas Ribs (beef) when I stole a rib from my girlfriend. Kansas City beat Texas like the Chiefs wish they could beat the Longhorns (football reference).

The pork ribs were a hot mess. Napkins and sauce galore. It's hard to find GF BBQ sauce, and doubly so to find good sauce at a restaurant. Blue Smoke delivered. They also had a handy contraption by the bathrooms...a pedal operated sink. These folks understand the need to get one's hands dirty...and the need to avoid the stigma of being "that guy that got BBQ sauce all over the faucet in the bathroom." 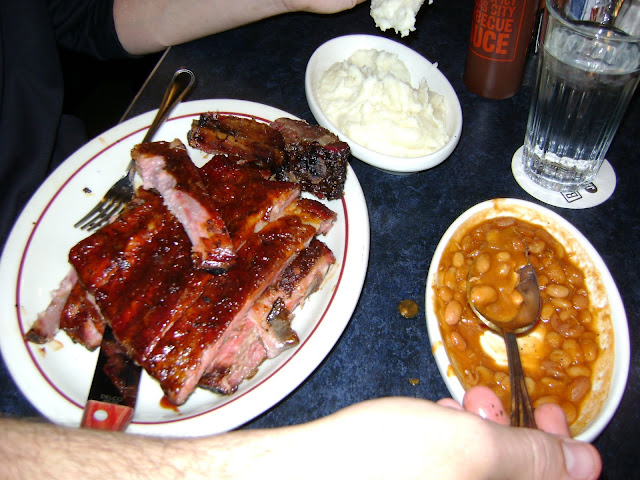 The mashed potatoes were hearty, but I needed to send them back the first time as they forgot to take the onions off (Gluten on the deep fried onions). The beans, sadly, were bland and lukewarm. They have Redbridge GF Beer at a rather exorbitant price. (I reviewed Redbridge previously in my blog). I was also disappointed that there were no dessert offerings. Mr. Blue Smoke...call up Babycakes NYC and get some GF cupcakes from them to offer on your GF menu.

No dessert, expensive beer, so-so mashed potatoes, bland beans, but bbq pork ribs that make everything great. If you have Celiac Disease and are traveling to New York, Blue Smoke is worth a visit.

Tucked away in a corner of the Men's Bathroom is a little plaque that mentions Blue Smoke is Michelin Food Guide Recommended. It also earned a 2010 Bib Gourmand Rating. Details on what on earth that means after the link. That alone may convince some of you foodies to pay it a visit.

On a baseball note/rant:
Blue Smoke BBQ is slated to be sold at food stands in the new Mets' Ballpark CitiField. Lucky Devils. Here's hoping they sell a GF option. LA Dodgers take note. I won't spend money on a Dodger Dog sans Bun. I would drop serious dough for GF BBQ at Dodger Stadium (bad pun not intended but noticed after the fact...dough better be GF).
Posted by Simon

About Your Local Celiac

Simon
Los Angeles, United States
I'm tired of browsing the web to double check my memory. I created these blogs as a single source for me to use in leiu of the searching, and for my friends to use when they have questions...It will be updated infrequently based on my needs...both gluten free food or tech related. My food posts are going to have a bit of a West Coast leaning to them (along with a healthy dose of sarcasm, humor, and the occasional rant - though I think you may have figured that out already). Tech posts will be for me to refer to or to create valuable information that I have not found compiled anywhere else that may be of use to other people.